In a preview post, I published a video of Shereen El Feki speaking in a TED conference, video that I translated into French a couple of months ago.  In this conference, Shereen was talking about the Ninety Nine, a group of superheroes inspired by islamic values.

Now, it is Dr Naif Al-Mutawa himself who is the invited speaker of a new TED talk about his own creation.

END_OF_DOCUMENT_TOKEN_TO_BE_REPLACED

it’s time for us to reveal

The Safety Net Project is a program associated between Lingua  Lingua Franca Foundation and Hotel Abadi Sdn Bhd (Hotel Abadi Melaka) to promote safe and harmonious ‘win-win’ international exchanges as well as diversity between nations. This project aims to deal with domestic violence against women from abroad and to help them to integrate in the welcoming country or to go back safely to their country of origin and to inform local authority, potential partners and contributors of the current situation and what plans for improvement. It is also a discussion platform for future collaboration from both sides to promote and maintain the durability of the project.

”  Somebody you know may need these information badly. The speakers are people with first hand experience on the subject, and have worked with people with similar predicaments. The lesson from their experience is that some problems can be prevented, and it is best if you are prepared before making that big decision! Read the brochure to find out more! “ 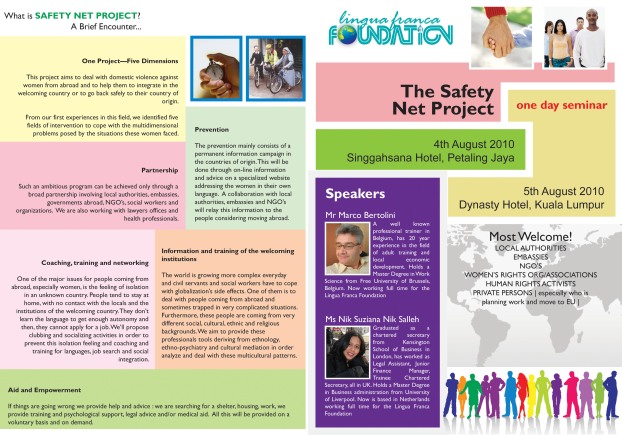 REGISTER NOW TO SECURE YOUR SEAT

Click here if you wish to pay with the credit card

There is a new project buzzing around the local neighbourhood. I heard this through a contact of mine. We accidentally bumped into each other 2 days ago at one of the Youth & Family Development centres. The last time we spoke, I told her about my idea to propose a project in exposing children to multiple languages at very tender age.

Apparently that somehow caused some sort a chain reaction since, mysteriously out of the blue, she suddenly told me that she (and other colleagues) are in the process of trying to propose some sort of programme to develop children’s mind from birth till they are 4 years old.

Unfortunately we had to cut our conversation short due to appointments we both had to attend (but at different location with different people), but now it gives me a very strong impression that people do think the idea of teaching children and exposing them to new methods of learning, or a new language, etc. is extremely important in order to maximise the potential of the child’s mind and to gear it up to its fullest capacity. I have to say; I got excited! And I fully support this notion.

END_OF_DOCUMENT_TOKEN_TO_BE_REPLACED

Shereen El Feki : creating a gathering place for Arabic people and the rest of the World

Samuel Huntington’s Clash of Civilizations showed the war between civilization as unavoidable, something engraved in the core of geopolitics since the beginning of times…  A lucid examination of history shows something rather different : cultures and civilizations always exchange, giving to and borrowing from each other, excluding some elements and integrating some others according to the proper dynamics of their own evolutions.  The Arabic and Muslim world is no exception to this rule and is re-interpreting elements from modernity according to local needs and conditions, “to produce novelties which are neither conventionally Western nor traditionally Arab“.

Shereen El Feki, half Egyptian, half Welsh, is observing these side effects of globalization. “Her passion lies in the many projects in which she is involved which aim to better understand, and surmount, the social challenges facing Arabs, particularly young people”.

In this video, published by Ted India, she is showing some examples of these borrowings.

END_OF_DOCUMENT_TOKEN_TO_BE_REPLACED

Ban on minarets construction in Switzerland : the extreme right used “irrational fear” to reach its goals

The entire world was  abashed when the results of a poll against the construction of new minarets in Switzerland have been published.

The extreme right party – Swiss People’s Party (SVP) – launched such a gross campaign against the minarets, using posters showing a woman with a burqa facing a Swiss flag covered with missile-shaped minarets, that everybody expected a defeat of the populist party.

But inf fact a majority of 57.7 % voted for the ban of minarets construction in Switzerland.

But what tsunami ?  There are 400.000 Muslims in Switzerland, out of a total population of 7.739.000 inhabitants. Most of them work and are perfectly integrated in Swiss social life.  There are about 400 mosques in Switzerland and… 4 minarets!

END_OF_DOCUMENT_TOKEN_TO_BE_REPLACED

As you have read about the Piccolingo – an European program aimed to promote early language learning for preschool children; I am wondering  and strongly hoping that this sort of project is achievable and manageable in the Dutch region.

The Lingua Franca Foundation (Lingua Franca Academy) – is seriously promoting such cause – wanting full exposure for very young children to adapt to more than one language. Having to master more than one language is considered a skill – and to be able to learn and sharpen one skill at a very tender age is a long lasting investment! Not many children having this unique advantage, but those who do, should be given full boost to further their knowledge in this field.

END_OF_DOCUMENT_TOKEN_TO_BE_REPLACED

Dalilah was rather lonely. She looked around and to her amazement, she saw love everywhere. Everywhere else but unfortunately love never stayed long in her life. Envious with all her girlfriends’ love fortune, she promised herself that she would not end up alone in the desert island. She wanted the same. She wanted to be loved and to give love.

Being such a hard headed woman, Dalilah was not the type to flaunt her body. She valued her self worth, although sometimes that didn’t help her much getting into the dating game. She felt more lost and isolated. Most of her girlfriends spent most of their nights partying out – enjoying their youth. Whilst Dalilah, being rather conservative, she decided that true love would come crawling at her feet one day. The honourable way.

Looking at her life and constantly comparing it with her close mates, she felt more and more desperate. After her first divorce, she only had two serious relationships, which tragically to say, ended up in total disaster. At one point, she concluded that she was destined not to experience love, nor to give love – until she met Maarten.

Dalilah got acquainted with Maarten many years back – but only as friends. She wasn’t ready to open up to him – or to any man for that matter – especially to someone who differs entirely from her background. Maarten was there mostly for work. His employer sent him to the East to promote their company. To Maarten, the East is not some strange remote place anymore since he was almost awarded as the ‘frequent flyer’ from the Dutch Airlines! Maarten wanted to blend in – including having relationships with the local women. He tried his best and unfortunately failed many times over. Somehow he didn’t seem to learn from his mistakes. Maarten was also hard headed. Just like Dalilah.

After 7 years of friendship, somehow fate brought them together. Dalilah was ecstatic. She dreamed of the prince charming on the white horse. The red carpet treatment.